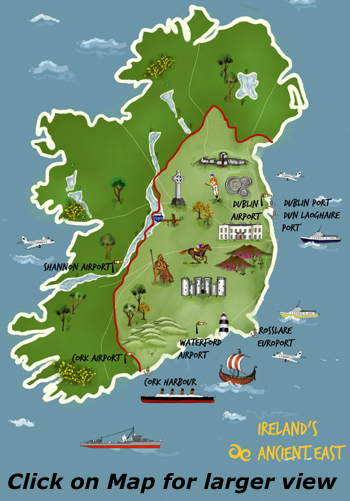 Ireland's Ancient East is geared to maximise the history and heritage in the region and bring it to greater international attention. To do this, the new initiative will offer visitors a personal experience of 5000 years of history through a relaxing journey of discovery in the beautiful landscape that attracted warring settlers for millennia and illuminated by stories from the best storytellers in the world - the local people.

Stretching from Newgrange and the Boyne Valley in the north east all the way down via Kilkenny's Medieval mile to Waterford's Viking Quarter, Ireland's Ancient East matches and complements the Wild Atlantic Way in the west of Ireland.

There are many treasures in the south and east that are older than the pyramids, set in an ancient green landscape - passage tombs, dolmens and Stone Age observatories that are found throughout Ireland's Ancient East. Visitors can wonder at the meanings behind the largest concentrations of carved Stone Age artwork and Celtic gold artefacts in Western Europe as well as hear from the locals themselves the stories that infuse this landscape of ancient warriors and Celtic druids.

For example, the low hills that you cross from the valley of the Liffey to that of the Boyne mark the crossing to a far more ancient time. Here there are a collection of pre-historic ceremonial sites that connect the lives and deaths of Stone Age Man who lived here to the seasons of the land in which they lived. Moving south visitors can stop off at Brownstown Dolmen, in the fertile farmland between the Slaney and Barrow rivers and marvel at its 100 ton capstone and, from here, the Slaney Valley takes you to the Irish National Heritage Park where everyday life in the Stone Age is beautifully recreated.

Step into the Golden Age of Saints and Scholars and visit the university and monastery sites where Ireland's pioneering saints and monks wrote some of the world's greatest illuminated manuscripts, before spreading their learning and spirituality throughout a Europe locked in the Dark Ages.

Explore the pathways of Medieval Ireland and uncover a rich tapestry of tales from this turbulent time. From the Viking Triangle of Ireland's oldest city, Waterford, lush river valleys lead to the beautifully preserved Medieval City of Kilkenny and beyond.

The fortresses and castles built to protect the land and its occupants are evident everywhere in the region. For example, Hugh de Lacy's magnificent Norman Castle still dominates the landscape at Trim. In the beautifully preserved Medieval City of Kilkenny the spirit of centuries of craftspeople still lives and breathes - in the merchants' houses, the Norman castle, the monks' ale, the potters, jewellers, weavers, artists and artisans of every kind.

Discover the stories of a time of contrasts which shaped the lives of the now settled conquerors of Ireland and those they ruled over. Experience what life was like in the 18th and 19th centuries. Lavish gardens, opulent houses and market towns are all there for them to explore including the great estates at Powerscourt, Mount Usher, Avondale, Castletown, Emo Court, Altamont and Lismore.

The romantic ideals of these times inspired others to failed Rebellions, or to seek better fortune and escape from famine through emigration. At Dunbrody Famine Ship, in Wexford, for example, they can discover what leaving was really like for them. At Vinegar Hill and Wicklow Gaol visitors can see what became of those who stayed and fought for change here. 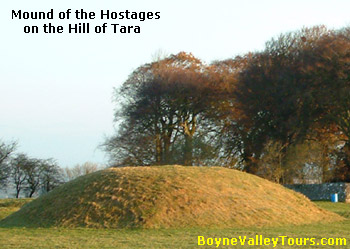 Since your tour is private and personalised, you will be picked up from your accommodation or cruise ship in the Dublin / Meath / Louth area. Private transport in a Skoda Superb Sedan for up to four passengers or Mercedes MPV for up to seven passengers. More ...

1. Waterford City is Ireland's oldest centre of continuous urban settlement in Ireland and is consequently Ireland's oldest City. Founded by the Vikings between 856 and 914, the city is over 1,000 years old.

2. Muiretach's Cross, Monasterboice in the Boyne Valley is Ireland's most beautiful High Cross and West Cross is the tallest remaining Celtic high cross in Ireland.

3. Newgrange and Knowth in the Boyne Valley are the best-known Irish passage tombs dating to 3,200BC. Newgrange is the oldest known deliberately orientated structure in the world.

4. Loughcrew in the Boyne Valley is the oldest cemetery in the world and tells of Ireland's Neolithic cultures. One legend has it that the so-called burial mounds were created by a witch flying overhead and dropping pebbles on the landscape.

5. The Timahoe round tower in Co. Laois is one of Ireland's most beautiful. It was built in the 1100s. Carvings of human heads, with flowing beards and moustaches, decorate the main entrance, about five metres from the ground.

6. Trim Castle in the Boyne Valley is Ireland's Largest Anglo-Norman Castle. It is also the place where the film Braveheart was shot.

7. Lough Tay in Co. Wicklow was the filming location for the original 'Vikings' series and now the 'Vikings: Valhalla' series.

8. Ballitore in Co. Kildare is the only planned and permanent Quaker Settlement in Ireland.

9. Ireland's oldest known bridge crossed the River Shannon near Clonmacnoise in Co. Offaly. Underwater archaeology in the 1990's revealed the remains of a great wooden bridge at least 120m in length dating from 804AD.

10. Lockes Distillery in Kilbeggan, Co. Westmeath was licensed in 1757 and produced whiskey for over 200 years. Now open as a museum, it is the only sample left in Ireland of a typical small pot distillery.

Private Day Tours out of Dublin to the Boyne Valley, home of the Newgrange World Heritage site, Glendalough and the beautiful scenery of Wicklow, the Irish National Stud and the Japanese Gardens in Kildare.  More ...