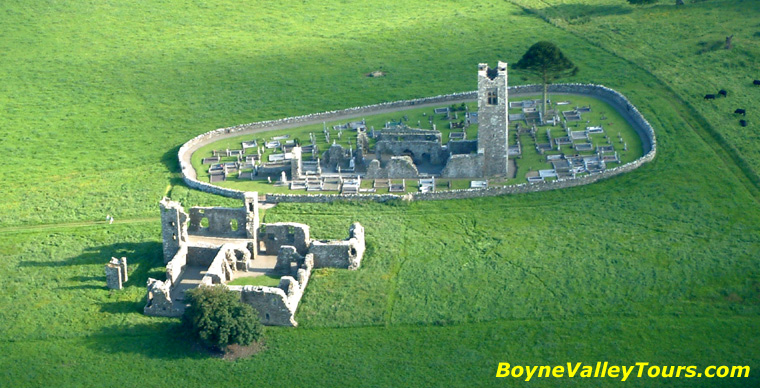 The Hill of Slane to the north of Slane Village is 158 metres (518 ft) above the surroundings. There are a number of historic sites located around the top of the hill. In the Metrical Dindshenchas, a collection of bardic verse, the ancient Fir Bolg king Sláine mac Dela was said to have been buried here, in the place that had been called Druim Fuar that came to be known in his memory Dumha Sláine.

The hill may have been chosen as the site of Christian abbey due to the presence of an existing pagan shrine, the remains of which may be two standing stones in the burial yard. Muirchu moccu Machtheni, in his highly mythologized seventh century Life of Patrick, says that St. Patrick lit a Paschal fire on this hill top in 433 CE in defiance of the High King Laoire who forbid any other fires while a festival fire was burning on the Hill of Tara.

Historians and archaeologists agree that Muirchu has moved to Slane a fire lit elsewhere; Brú na Bóinne, and Knowth have been suggested. The Hill of Slane can be seen from the Hill of Tara which is about 16 kilometres (10 miles) away. According to Muirchu, Logaire was so impressed by Patrick's devotion that, despite his defiance (or perhaps because of it), he let him continue his missionary work in Ireland. It is somewhat more certain that Patrick appointed a bishop of Slane, Saint Erc.

The Hill of Slane remained a centre of religion and learning for many centuries after St. Patrick. The ruins of a friary church and college can be seen on the top of the hill. It is known that Slane Friary was restored in 1512. The ruins include a 19-metre (62 ft) high early gothic tower. The friary was abandoned in 1723.

"It is a perfect way to see the Boyne Valley and customize your tour however you want to. I highly recommend Boyne Valley Tours"  More ...

"If you are lucky enough to have the opportunity to book a personal tour with Michael, you should take it! It's like having your best friend show you around"  More ...

"My family and I hired Michael to take us around for a private tour and we were nothing less than thrilled"  More ...


The Hill of Slane - A Powerful Place

The 158 m (518 ft) high Hill of Slane is just a km or so north of Slane Village and 15 km north of the Hill of Tara. It was the site of a famous (or infamous) conflagration, the fiery contest between a Christian missionary and native Irish pagans in 433 CE. Ireland was a country of warring tribes, based on the Celtic social pattern of hierarchy and status. Religious leaders called Druids provided guidance to the kings and performed important rituals. Into this pagan world came St Patrick, sent if not by God then by the nearest thing on earth: the Pope in Rome.

At the spring equinox, the ruling High King always lit a fire on the Hill of Tara, the religious-political centre of Ireland. From there the flame would spread around Ireland. In 433 CE the command went out that no one, on pain of death, was to light a hilltop fire before the High King Laoghaire lit his. Enter St Patrick, who saw his opportunity to make an inflammatory statement. He climbed up to the top of the Hill of Slane (or so the legend goes, though historians and archaeologists claim he climbed Brú na Bóinne or Knowth instead) and stole the show, lighting his Paschal fire before that of the High King. The enraged king knew the fire was a direct challenge to his authority. He rode to Slane (or maybe he had Patrick brought to Tara) and a confrontation took place.

Legend says that the King Laoghaire's irate Druids demanded the fire of Christianity be extinguished that very night or else it would burn forever. They challenged St Patrick to magical battle but could not defeat him. As a result, the king permitted his followers to become converts. At least one did: Erc. St Patrick rewarded St Erc by naming him bishop of Slane, and on the now-Christian Hill of Slane he established a school. A local church holds an annual ceremony on the hill with a small fire to commemorate the event.

Although Patrick won the battle, he may not have won the war. Over the centuries, a unique Celtic Christianity developed, influenced by the Desert Father and Egyptian Coptic Christianity, that embraced isolated, ascetic monastic life such as found on Skellig Michael, a craggy, isolated island 10 km off the southwest shore of Ireland.

Celtic Christianity encouraged far-flung missionary activities and maintained a close relationship with the natural world. Irish Christianity lasted at least until the twelfth century, when Norman England and Rome-administered Catholicism conquered the Emerald Isle. It was never completely extinguished, and in recent decades it has experienced a renascence. 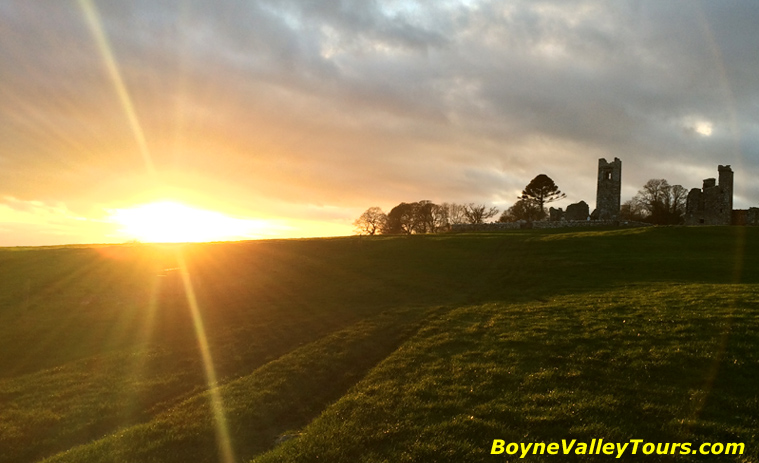 The Hill of Slane has other claims to fame than Patrick's Paschal flame. The so-called motte on the western side, inaccessible and hidden in the trees, is said to be the remains of the 1170s fortification of Richard le Flemyng of Flanders. It is probably instead the ancient burial mound of the Fir Bolg king Sláine, who legend claims is buried there.

A ruined Franciscan church and college from the sixteenth century still survive on the hill. St Erc's original foundation and his remains may lie to the south of the present church or possibly in the ruined “mortuary house” in the graveyard. Tradition says that the two gable ends, with large upright rectangle stone end-blocks, are the remains of Erc's shrine. These standing stones may be the remains of a megalithic construction that was Christianized as was the Hill of Slane. As late as the twentieth century, the shrine was visited as part of local burial rites.

The Hill of Slane is intervisible with Newgrange and Knowth, about 5 kms to the east. On a clear day you can see Drogheda, the Irish Sea, and the Wicklow Mountains to the south.