The 5000 year old Stone Age Cairns spread across the hills at Loughcrew make up one of the three main concentrations of Passage Tombs in Ireland, the others are Brú na Bóinne (Newgrange, Knowth & Dowth) and Sligo (Carrowkeel & Carrowmore). The Cairns are spread across three hills, Carnbane East, Carnbane West and Patrickstown. The Irish name for the site is Slieve na Caillaigh, which means "mountain of the hag". Legend has it that the monuments were created when a giant hag, striding across the land, dropped her cargo of large stones from her apron. 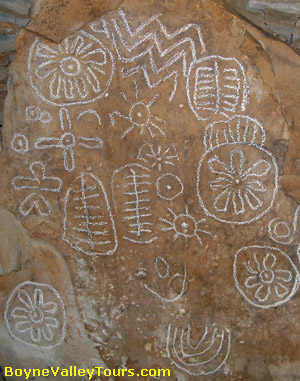 The illumination of the passage and chamber at the Winter solstice sunrise in Newgrange is world famous. Less well known is the Equinox illumination at sunrise in Cairn T at Loughcrew. The backstone of the chamber is illuminated by a beam of light at sunrise on the Spring and Autumnal Equinoxes. The sun light is shaped by the stones of the entrance and passage and descends the backstone while moving from left to the right illuminating the solar symbols. 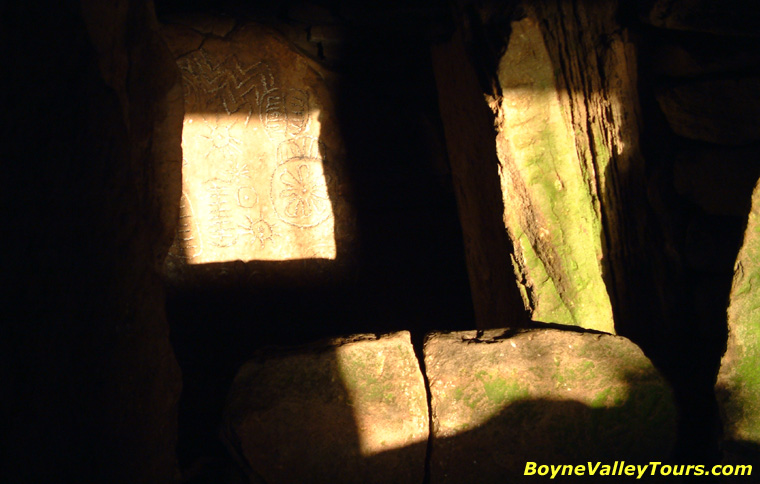 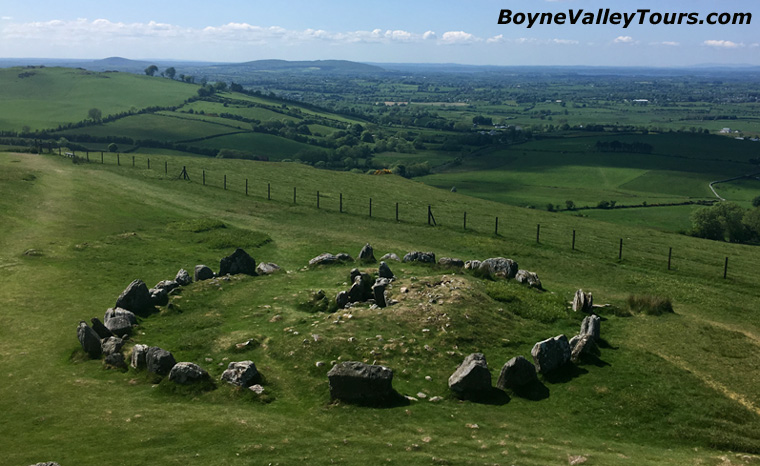 In more recent centuries Loughcrew became the seat of a branch of the Norman-Irish Plunkett family, whose most famous member became the martyred St Oliver Plunkett. The family church stands in the grounds of Loughcrew Gardens which is open the public. The Plunketts were dispossessed in the Cromwellian Settlement of 1652 when their estate at Loughcrew was assigned to the Naper Family who still farm the lands around Loughcrew.

Loughcrew Megalithic Cemetery is also known as Sliabh na Cailli or Slieve na Cailliagh - the Hill of the Hag, the Cairn of the Witch, the Mountain of the Sorceress, the Witches Hops - you get the idea.

Loughcrew, named after a local township, is one of the four largest megalithic cemeteries in Ireland. More than thirty chambered cairns, many with interior stone carvings, are spread over a ridge of three hills - along with a variety of monuments, including stone circles, henges, standing stones, Iron Age forts, and the remains of a cursus (a ceremonial entrance way).

The cairns are contemporary with Brú na Bóinne (Newgrange, Knowth and Dowth), having been constructed between 3500 and 3300 BCE, but they are much less reconstructed and have not been comprehensively excavated.

Although far less famous than Brú na Bóinne, Loughcrew is equally impressive though for different reasons: the lack of touristic infrastructure, the number of cairns in proximity, the stunning 360° views over undulating farmland and quiet lakes. Most impressive of all, it is possible to unlock the metal grate and enter Cairn T. Get the key, open the gate, enter the passage, switch on your flashlight to illuminate the stone carvings and spend as much time as you want, hopefully alone, inside the ancient mound. It is a very powerful place.

The Loughcrew cairns are spread over Cairnbane (Carnbane) East (from carn, meaning pile or heap) and Cairnbane (Carnbane) West, the latter on private land. Cairnbane West include cairns A through L; Cairnbane East includes cairns R through W. The interior passage graves are usually described as constructed of limestone, but their composition includes sandstone, a coarse greywacke called gritstone, and conglomerate; the stones were either left by glaciers or taken from local outcrops.

Cairn H on Cairnbane West has multiple spirals on a kerbstone; excavations discovered first-century CE Iron Age objects. Cairn L has five side chambers and an interior carved standing stone. Cairn L is oriented toward the Imbolc/Samhain sunrise (just like the Mound of the Hostages on the Hill of Tara). These cairns are not accessible to the public because the owner does not allow people on his land.

Cairn T, AKA The Hag's Cairn, is the largest on Cairnbane East and can be entered if you have the key. It is 37 m (120 ft) in diameter; its circumference is 113 m (369 ft); and it is oriented slightly south of east. At the end of the narrow passageway are a 3 m/10 ft-high domed chamber with corbelled roof and three side chambers, also with corbelled roofs. Fragments of charred bones, charcoal, and a bronze pin were found during the original excavation. Several of the interior stones in the passageway and in the inner chamber are decorated with geometric patterns, including circles and zigzags, and flower and sun motifs.

Most impressive is the backstone of the rear chamber, which is lit by a beam of light during spring and fall equinox sunrises. On the north side of the mound is the Hag's Chair, a massive kerbstone shaped into a "chair." It has carvings on the front side, but they are barely discernable. A cross was carved into the "seat," perhaps in the eighteenth century, when it might have been used as an altar for holding secret outdoor masses during a time when public Catholic ritual was forbidden. The chair-like stone has been called Ollamh Fodhla's Seat, named after the mythic poet who was the first lawgiver of Ireland. It is also known as the Seat of the Cailleach, and folklore reports that you can sit there and make a wish-but only one. Traditions tell that Queen Tailte or Queen Medbhe (Maeve) sat on it and proclaimed laws, or that the old hag, the "Caillaigh Waura," sat on it.

The word "Cailleach" comes from "old veiled one": caille = veil or caul. Why veiled? She is veiled in mystery. The Cailleach was the ancient ancestral goddess found throughout Ireland and Scotland, and each tribe had its Cailleach. She was often associated with the Sovereignty of the land. She represented the dark side of the goddess, the side of death and rebirth, of transformation-and winter--in contrast to Brigid, goddess of healing, creative inspiration, eternal flame, and springtime. Her time is often said to begin at Samhain (November 1) and end on Imbolc (February 1), while Brigid rules the rest of the year. Numerous mountain ranges and large hills are said to have been formed when she accidently dropped rocks out of her apron. She has similarities to the Hindu mother goddess Kali, another powerful transformative "dark" goddess. Medieval monks, who wrote down local stories, turned this powerful goddess of death and rebirth into a sad old hag. Later the word came to mean "nun": one who took the veil. And later still, it degenerated in common usage to mean "old bag."

Elyn has found the central chamber and side chambers of Cairn T to be extremely powerful. Center yourself and make an offering, in whatever form you consider appropriate, to the earth energies, personified or otherwise, that reside in the hill. Or simply set your intention to experience this powerful ceremonial site. For 4000 years the Cailleach, the winter earth goddess, has been associated with this location, and her power has not diminished with the passing of millennia. Perhaps Cairn T is "recharged" twice each year with the entrance of the beam of light at the equinoxes. You don't have to be a worshipper of the goddess to feel the powerful earth energies that surge up inside the cairn. Ask permission to enter; if granted, enter. Take time to be present. Experience the different energies in the different side chambers. Perhaps you will even sense the presence of the Cailleach. 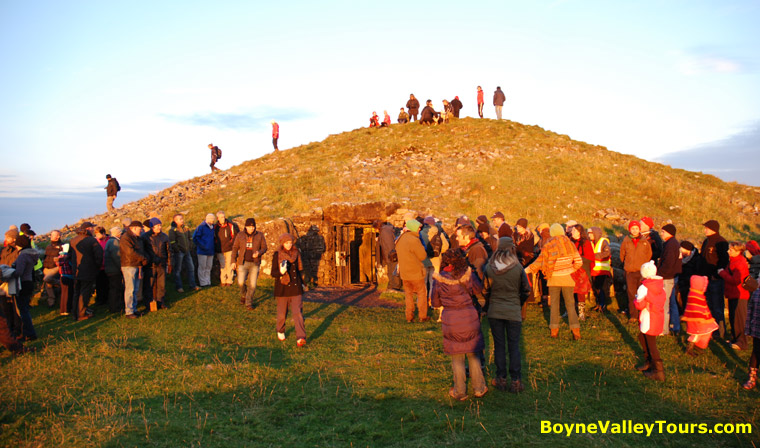 At Loughcrew Cairn T, the 5000 year old megalithic passage tomb the rising sun on the mornings around the equinox illuminates the passage and chamber  More ...


Loughcrew megalithic tombs, the largest tomb with the stone cairn still in place is Cairn T, the surrounding ruined cairns are Cairn S, Cairn U and Cairn V.