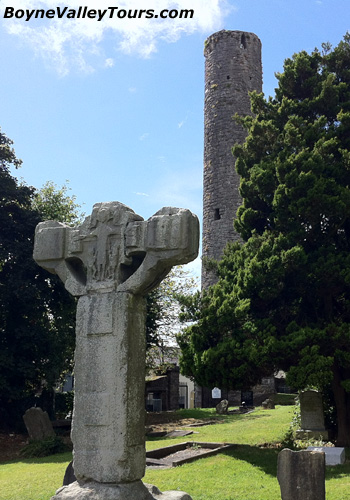 Kells or Ceanannas Mór in Irish meaning 'Great Fort' was a Celtic Royal residence before St. Columcille founded a monastery in the 6th Century. The monks from his community on the island of Iona off the west coast of Scotland moved to Kells in the 9th century to escape savage Viking raids. The Iona monks brought with them the now famous Book of Kells which may have been completed in Kells.

The modern market town is centred around the monastic enclosure with High Crosses, a round tower and St Columcille's house.

The Book of Kells

The Book of Kells is the most decorated illuminated manuscript to survive from the early medieval period in Europe. The Book of Kells was probably written and illustrated by Columban monks on the island of Iona off the west coast of Scotland in the 8th century. The monastery on Iona was founded by St. Columcille (St. Columba) in the 6th century. The monks transferred to Kells in the 9th century as a result of Viking raids at Iona, maybe the finishing touches were completed in Kells.

The 9th century High Cross was originally located at the eastern gate to the monastery. It is now located outside the former courthouse at the entrance to the town. The courthouse built in 1801 was designed by the Irish architect Francis Johnston who also designed the General Post Office in Dublin. 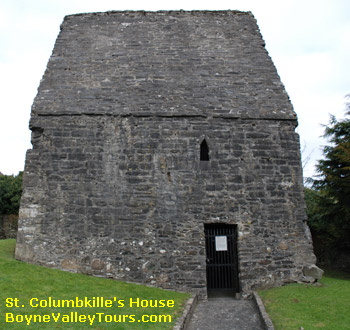 A 10th century oratory with a step stone roof and barrel vaulting.

St. Columcille's house as described by the antiquarian Dr. Petrie. "This remarkable building is, in its ground plan, of a simple oblong form, measuring externally twenty-three feet nine inches in length, and twenty-one feet in breadth, and the walls are three feet ten inches in thickness. It is roofed with stone, and measures in height, from its base to the vertex of the gable, thirty-eight feet; and as the height of the roof and width of the side walls are nearly equal, the gables form very nearly equilateral triangles.

The lower part of the building is arched semi-circularly with stone, and has at the east end a small semicircular-headed window, about fifteen feet from the ground; and at the south side there is a second window with a triangular, or straight-lined head, about the same height from the ground, and measuring one foot nine inches in height. These windows splay considerably upon the inside.

The present entrance doorway of this building, which is placed in the south wall, is obviously not original or ancient; and the original doorway, which is now built up, was placed in the west end, and at a height of eight feet from the ground. The apartment placed between the arched floor and the slanting roof is six feet in height, and appears to have been originally divided into three compartments of unequal size, of which the largest is lighted by a small aperture at the east end. In this chamber is a flat stone, six feet long and one foot thick, now called St. Columb's Penitential bed.”

St. Columcille (521AD - 597AD) was born in Co. Donegal and studied at Clonard Abbey in the Boyne Valley, he became a monk and later a priest. He founded several monasteries in Ireland, including Kells. Columcille coped a manuscript at the scriptorium of St. Finnian at Movilla Abbey. Columcille wanted to keep the manuscript but St. Finnian disputed his right to keep the copy. The dispute led to the battle of Cúl Dreimhne is 561AD during which many men were killed. As a result Columcille moved to the island of Iona off the west coast of Scotland which was at the time controlled by Gaelic Irish.

Columcille died on the island of Iona in 597AD and was buried by his monks at the abbey he founded. In 794AD the Vikings descended on Iona and Columcille's remains were later removed and divided between Downpatrick in Ireland and Scotland. There are several versions of St. Columcille's name including St. Columba, to add to the confusion St. Columbanus (543AD - 615AD) was a different Irish Saint from the same period. List of variations: