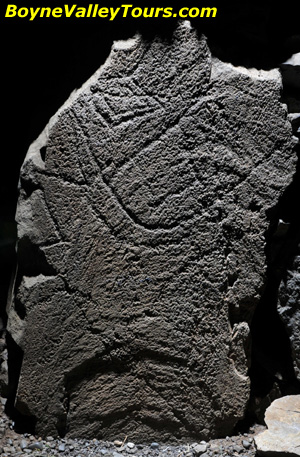 Fourknocks is a passage tomb on a smaller scale to Newgrange, however it is a much more intimate site. There is no visitors centre and seldom anyone else around to disturb the peaceful atmosphere. Spend as long as you want inside the chamber, studying the wonderful megalithic art or in quiet meditation. The engraving of a human face and torso on a stone in the chamber is one of the oldest anthropomorphic representations in Ireland.

Fourknocks was constructed about 5000 years ago and is contemporary to Newgrange and the other passage tombs in the Boyne Valley. It is located 16km (10 miles) southeast of Newgrange. The name Fourknocks is from the Irish Fuair Cnocs meaning Cold Hills.

Fourknocks has a short passage leading into a wide pear shaped chamber with three smaller offset chambers. The original roof was probably a wooden structure supported by a central pole. The current concrete roof was constructed in 1952 at the end of a 2 year excavation. Fragments of 65 burials were found in the tomb, both cremated and unburnt remains of adults and children. Decorated Pottery and Vessels and personal ornaments including pendants and beads were also found. All of the items found were moved to the National Museum.

The entrance to Fourknocks is too far north to have a solar alignment, however the Fourknocks mound is aligned with the path of Winter Solstice sunrise towards Newgrange. During the stone age the passage at Fourknocks was aligned with the helical rising of the “W” shaped constellation of Cassiopeia, perhaps this accounts for the dominance of W shaped zig zag megalithic art at Fourknocks. 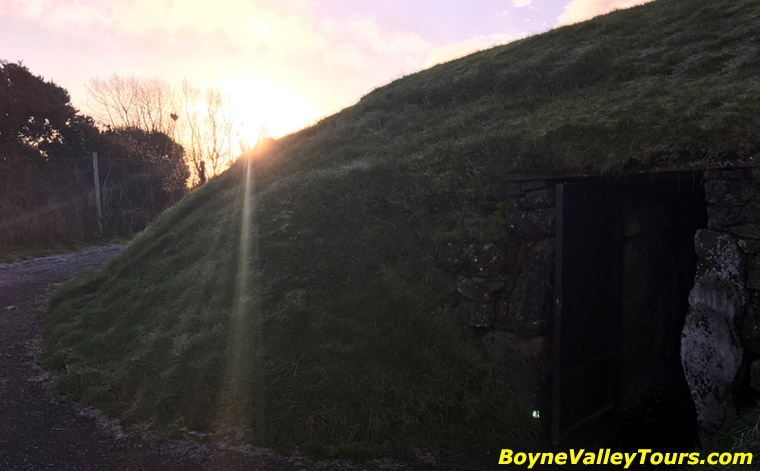 Other sites near Fourknocks include a Sheela na Gig and a Garden Labyrinth.


I can't thank Michael enough for making our day in the Boyne Valley such a wonderful experience.

This 4500-year-old passage-tomb cemetery and prehistoric complex is located on a hill above the village of Naul, southeast of Newgrange. “Fourknocks I” is under guardianship of the State and can be entered; the other monuments are privately owned. It appears that the individual tombs in the complex were inter-related. Gabriel Clooney describes the gradual “twinning” of Fourknocks I and II over millennia, during which time they were transformed into complementary ritual settings. For example, the passageway in Fourknocks I goes upward, but that in Fourknocks II, 50 m to the east, goes downward.

The passageway of Fourknocks I opens to the northeast. The chambered cairn can be easily entered if you go with a guide, or you can arrange to get the key by following the instructions signposted at the entrance to the path to Fourknocks. We highly recommend visiting the site with a guide. If you go on your own, be sure to bring a flashlight.

The site was excavated in the early 1950s and reconstructed with a concrete domed ceiling, which has undoubtedly changed the energies of the place. (Using concrete for reconstruction is rarely done today). It was re-grassed on the outside so that it would look like it had before the excavation. You can climb to the top of the cairn and enjoy the view. The mound is 16 km (10 mi) southeast of the Boyne Valley and 17.7 km (11 mi) east of Tara.

The 5 m (17 ft)-long passage leads into a large, circular chamber that is 5.5 m (18 ft) by 6.4 m (21 ft). The chamber has three recesses, giving it a kind of bloated cruciform shape. Geometrical patterns decorate twelve stones, with zigzags predominating. Notice the zigzags over the lintels: were they used to identify different tribes or families? Are they star maps? One of the carved standing stones is said to represent a face.

Bone fragments from approximately 60 individuals were found in the passage and the three side recesses, dating both from Neolithic times and later re-use during the Bronze Age. Cremains and unburned skulls and long bones were discovered, carefully positioned, sometimes with associated small stones. Grave goods including stone and bone pendants and beads, chalk marbles, pins (including a stunning antler pin), flints, and stone balls were also found.

The roof was partially corbelled, probably being closed off by a wooden roof with timber supports. Another theory is that it was left open as a star observatory. Martin Brennan believes the zigzags on some of the stones represent Cassiopeia, the w-shaped constellation, which was visible from Fourknocks during the Neolithic. It is hard to see how a chamber open to the sky would be consistent with the use of the mound as a grave. Obviously, there is much to be discovered.

If you enter Fourknocks, be very conscious of the energies you feel. Does it feel good to you? Weird? Welcoming? Unwelcoming? As is true at all sacred sites, it is important that you first ask permission to enter, then be present, pay attention, and take care of yourself. Fourknocks remains a very powerful place.