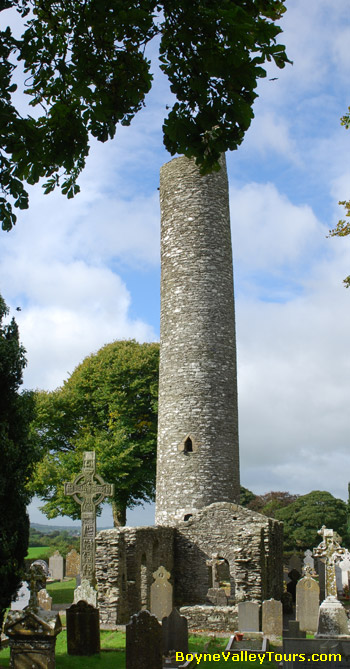 Monasterboice is one of Ireland's earliest Christian sites, the name derives from the Irish 'Mainistir Bhuithe' (monastery of Buite). St. Buite was an Irish monk and follower of St. Patrick, it is said that in 480, St. Buite on a return trip from Rome raised Nechtan Morbet, the King of Pictland (Scotland), from the dead.

At Monasterboice today you can see the Round Tower, the magnificent High Crosses and the the remains to two churches.

Although round towers were originally thought to have been places of refuge from Vikings, the Irish name 'cloic theach' meaning a bell house suggests they also served as bell towers. The tower at Monasterboice was burned in 1097, destroying the monastic library and other treasures. However, it is still in excellent condition, though without its conical cap. It is the second tallest round tower in Ireland.

The Vikings occupied the site for a period until they were routed by Domhnall, King of Tara, in 968. St. Buite's monastery remained an important centre of spirituality and learning for many centuries until the establishment of the nearby Mellifont Abbey in 1142.

At Monasterboice there are two of the finest High Crosses (Celtic Crosses) in Ireland – the South Cross (or Cross of Muiredach) and the West Cross (or Tall Cross) – which date from the 10th century. The sandstone crosses are finely carved and depict biblical scenes from the Old and New Testaments. Today the image of the High Cross is recognised internationally, not merely as a religious icon but also as a symbol of Irish cultural heritage. 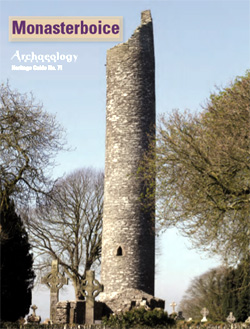 Conleth Manning, Senior Archaeologist with the National Monuments Service over the years has built up an almost encyclopaedic knowledge of Ireland's Early Christian and medieval remains. He brings that knowledge to bear on one the country's most renowned ecclesiastical centres in this well-produced guide. Expertly illustrated with maps and photographs and featuring Monasterboice's High Crosses the guide highlights the detailed iconography and artistic achievement that distinguishes Monasterboice. Download PDF (2mb)

From a distance, the first you see of Monasterboice is a tall round tower, jagged at the top, missing its original conical roof. The 28m (92ft) high tower pokes up above the surrounding countryside, announcing, “Here is Monasterboice.” Yet its original purpose was not just to be a beacon and a belfry: the unique Irish round towers, associated with monastic complexes, were also built to shelter inhabitants and valuables during Viking raids. Their doorways are almost always high—up to 4m (13ft) above the ground. Entry is only possible by ladder, which could be drawn up in times of danger. Unfortunately, that strategy did not prevent Monasterboice's tower from being burned in 1097, along with the monastery's library and other treasures. Before being burnt, the tower was probably 33m (108ft) high.

St Bhuithe (died 521CE) founded Monasterboice, hence the name, derived from Mainistir Bhuithe. The oldest monuments that survive are the three High Crosses and the round tower, which date from the tenth century. After the Cistercian abbey at Mellifont was established in 1142, Monasterboice was abandoned. A parish church was established on the site in the thirteenth century, and the remains of two small churches can still be seen.

High Crosses are found in both Britain and Ireland, but they are more numerous—and much more finely carved—in Ireland. Over 300 survive in Ireland. Along with their height, their distinctive feature is the ringed crosshead. The decorated ring or wheel that surrounds the centre of the cross supports the weight of the centre and the extended arms. It also brings a touch of Celtic spirituality to the Christian form, reminding us of the cycles of seasons and of the cycle of life and death and rebirth—and of unity and perfection. 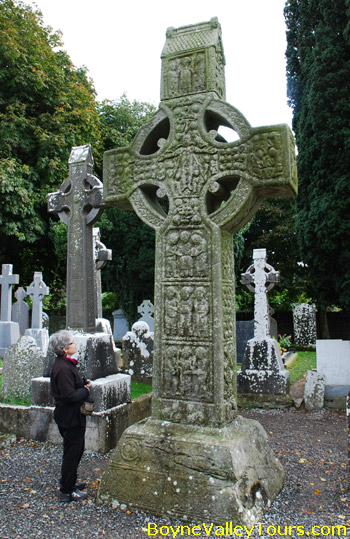 Irish High Crosses were carved between the eight and twelfth centuries. Early crosses were decorated with simple geometrical reliefs, but in the ninth and tenth centuries biblical scenes were introduced, meant to be “read” in a particular order, usually from the ground up. Interlaces, geometrical motifs, entangled creatures—what we often think of as “Celtic” art is derived from the style found all across northern Europe, Germany, Scandinavia and Anglo-Saxon England. It is quite possible that the High Crosses were originally coloured or brightly painted. Although the scenes carved on the High Crosses may have been edifying “sermons in stone”—similar to the “sermons in glass” found in stained-glass windows—the High Crosses were also status symbols for the monasteries and their patrons.

Monasterboice has three High Crosses, two of which are quite impressive. The South or Muiredach's Cross is 5.5 m (17 ft 8 in) high and is one of the most perfect in Ireland—a true national treasure. It is named after an abbot, probably Muiredach mac Domhnaill, who died in 923 CE and is commemorated in carving on the base. It is carved from a single block of sandstone attached to a pyramidal base; a decorative sandstone capstone sits on top. The entire surface of Muiredach's Cross is covered with ornate designs based on an underlying geometrical grid—a way in which the skilled stone carvers gave visual representation to the geometrical matrix that underlies reality.

Detailed figural sculptures of biblical stories (both Old and New Testaments) decorate the cross on the east and west sides; geometric and interlace ornamentations are carved on the narrower north and south sides. A series of zodiacal figures adorn the base. Its capstone is a tiny roofed building or miniature oratory, perhaps representing a reliquary. It includes a depiction of St Paul and St Anthony in the (Egyptian) desert.

The east side of Muiredach's cross, as is usual for High Crosses, focuses on images from the Old Testament. It begins at the base with a scene from the Garden of Eden, then moves up to Cain and Abel, David and Goliath, Moses, and the Magi. Within the wheeled center and extending through both arms is Christ at the Last Judgment. According to Nigel Pennick, this image is “based on the iconography of the resurrected Egyptian god, Osiris. Christ is holding a cross and Irminsul-staff in the Osirian position, and on his head is an eagle that resembles the crown of Egyptian gods and pharaohs”. Pennick interprets the figure to the left of Christ as Pan with his pipes, the harp-playing figure on the right as either King David or Apollo.

The west side is devoted, more or less, to the life of Christ, beginning at the base (above the inscription and some charming Celtic cats) with his arrest at Gethsemane and continuing upward to his crucifixion (complete with soldiers mocking Christ) and then his Resurrection. On the north side, under the outstretched cross-arm, is a depiction of the Hand of God (Dextera Dei) with a nimbus of power behind it, above intertwining vines with human heads.

The West Cross or Tall Cross stands near the north church and the round tower. It is 7m (23ft) high, the tallest High Cross in Ireland or anywhere else. It also is covered with biblical scenes, though they are badly eroded. On the east side of the crosshead is a carving of David killing a lion with a hurley stick and ball—the earliest depiction of the game in Ireland. The west side includes another crucifixion scene. The North Cross, which has been heavily reconstructed, stands to the north, next to what remains of an old stone sundial.

Monasterboice is in a delightful rural setting, surrounded by a low stone wall and numerous trees. It is neither neglected nor over-developed. There is no charge for entry. Visiting Monasterboice is like discovering a new friend—but one that you feel you have known for a long, long time, and one that you look forwarded to seeing again. 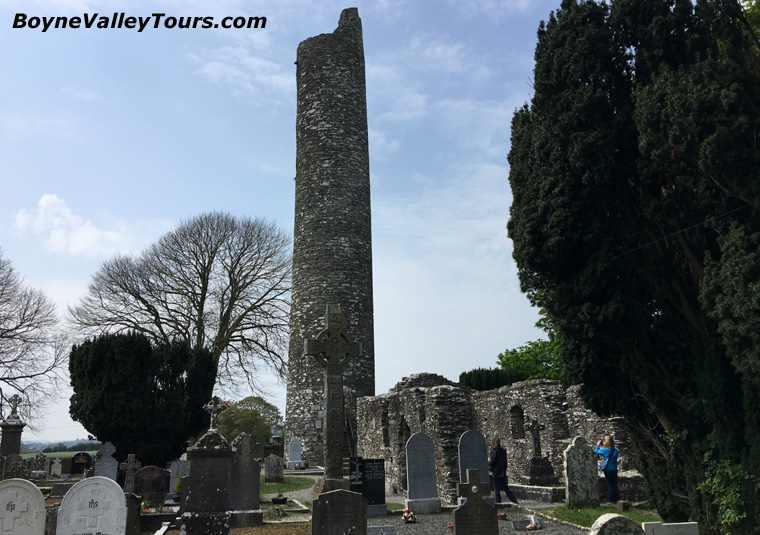 "Highly recommended for a great day out. The four of us had a great day out with Michael, visiting various historical sites ranging from Newgrange (3200BC) through to the Battle of the Boyne (1690). Michael was great company and couldn't do enough to ensure we enjoyed our day. At each site he organised everything to ensure we got the most out of our visit, arranging video presentations and tour guides and getting us ahead of larger groups."   More ...

"Fantastic Private Tour with Michael. My husband and I stayed at the Trim Castle Hotel, which made it easy to get an early start on our day tour. He picked us up in his immaculately clean car and we headed for Newgrange. There was an erie to the site, and we felt a connection to the past while the two of us lingered alone inside the chamber with the Newgrange guide. After hearing about our other interests, Michael took us to Dowth, Fourknocks, the Hill of Skeen, O'Connell's pub, the crosses and round tower at Monasterboice. Michael has lived in the Boyne Valley his entire life, and his knowledge of the area, and all of the amazing sites to see is second to none. If you are lucky enough to have the opportunity to book a personal tour with Michael, you should take it! It's like having your best friend show you around."  More ...