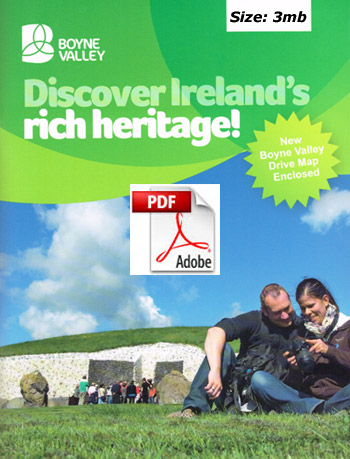 
The Boyne Valley is at once Ireland's ancient capital and its most sacred and mythical landscape. In 1849 William Wilde, father of Oscar, wrote of the Boyne that the history of Ireland may be traced through its monuments. This remains true today. Moreover, its sites and monuments are amongst the best examples of their kind in Europe and are all within a short distance of each other. In one day you can visit the great prehistoric tombs at Brú na Bóinne (Newgrange) and the site of the infamous Battle of the Boyne. You can look out from the Hill of Tara, sharing the view with the ancient High Kings of Ireland, or be mesmerised by the detail of the Celtic Crosses at Kells. You can stand in awe at the gates of Trim Castle, the largest Anglo-Norman castle in Europe, or pay your respects at the shrine of St. Oliver Plunkett.

The River Boyne is the principal waterway in Leinster, the most easterly of the Irish provinces. The river rises at Trinity Well, near Carbury, Co. Kildare and meanders slowly north-eastwards through the gentle and fertile plains of Co. Meath before entering the Irish Sea at Drogheda, Co. Louth. The valley through which it flows is a landscape of large farms, celebrated for their fine pastures, picturesque villages and thriving towns. There is a long history of continuous human settlement along the banks of the Boyne – stretching back over five millennia. So why did prehistoric people settle and thrive along the banks of this river? The answer lies in the landscape and climate of the region.

The richness of the soil in the lands bordering and drained by the Boyne was ideal for Neolithic farmers (who began to arrive in Ireland around 4,000 BC). Moreover, the east coast of Ireland, between Dublin and Drogheda, is the driest part of the country and ideally suited to growing crops. The river was valuable as a source of food and, long before roads, its waters were vital for travel and trade. The River Boyne, which derives its name from the legendary Celtic goddess Bóann, has long been recognised as one of Ireland's most important waterways.

In the 2nd century AD the Greek geographer, Claudius Ptolemy recorded the outline of the island of Ireland in the form of a set of coordinates showing different geographical features such as headlands and rivers. He included on this map, in his own language, the names of several Irish tribes, cities and rivers, including ‘Bouvinda' – the Boyne

The Boyne Valley Food Series serves to enhance and encourage a new wave of culinary tourist, whether opportunistic or deliberate, to experience the very best of ‘place on a plate', the personalities behind that plate and the story behind the production.