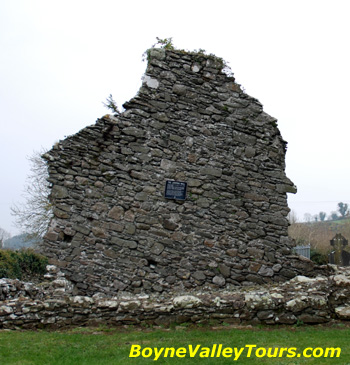 The Jumping Church at Kildemock is just outside the town of Ardee in Co. Louth, Ireland's smallest county. Nobody knows for sure whether it was natural or supernatural causes that prompted one of the church's walls to mysteriously relocate some two or three feet from its foundations in the year 1715.

Shrouded in local mythology, the jumping wall draws visitors from near and far. Legend says the enchanting wall of the church moved in 1715 to exclude the grave of an excommunicated man outside the building. While this sounds implausible, the notion that the wall (which remains largely intact) could possibly have moved in any other way seems equally improbably.

Another explanation is that a great storm caused the wall to shift – but is this really plausible? Storms have been known to damage or flatten buildings – but when has it been known for the forces nature to lift part of a building and set it back down in a new location? Surely, the wall would have crumbled whilst in mid-air.

All that remains at Kildemock today is a small ruin, containing the mystical wall that for reason either geographical or paranormal once jumped across the terrain. The displaced wall at Cill Demog is, frankly, a remarkable ancient wreck, clearly demonstrating how the western wall of the church ‘jumped' to stand over three feet inside its own foundations.

The Jumping Church (or Jumping Wall) is formally known as Millockstown Church. It is to be found atop a hill, with a spectacular view of the Carlingford and Mourne Mountains providing a stunning backdrop.

The legend surrounding why the jumping church has been thus named has never been authenticated, but there were obviously some happenings in the area at the time to give rise to such a myth, with the church already a ruin, an individual of inappropriate reputation was interred within the church grounds near the gable end, causing the outraged structure, pent up with disgust and supernatural powers, to jump across the offending corpse so that the unrepentant bones would henceforth lie outside the sanctified grounds of the ruined church. 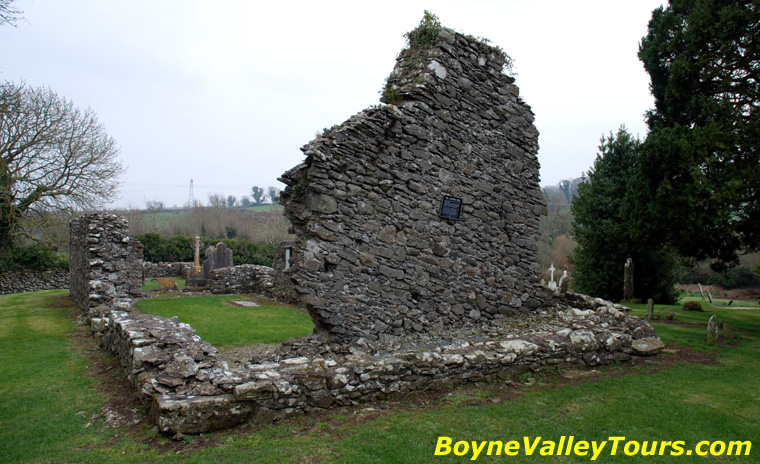 Contrary reports claim that on Candlemas Day 1715, a violent storm caused the west gable of the building to move eastwards, leaving it standing in its improbable new position within the church. Incredibly, the wall was severed in a straight line from the foundation (which lay a foot and a half above the ground) rendering the whole dislodgment utterly bizarre.

A plaque on the site reads: “This wall by its pitch, tilt and position can be seen to have moved three feet from its foundation. Contemporary accounts mention a severe storm in 1715 when the wall was lifted and deposited as it now stands but local tradition states that the wall jumped inwards to exclude the grave of an excommunicated person.”

The cynical mind is tempted to surmise that pranksters were at work on that fateful day when the Kildemock legend was born. But even today's skilled architects, with all their crews of qualified craftsmen, would struggle to carry out such a meticulous job so proficiently, let alone comparatively uneducated tricksters in rural Louth in 1715!

Alas, something is certainly amiss at the Jumping Church. Could there possibly be a Biblical reason? After all, the very premise of miracles is born of religion itself and nothing is more holy than one of God's churches. 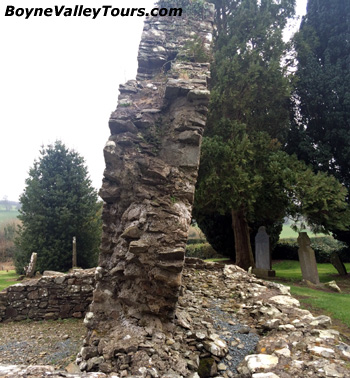 The year 2004 was something of a landmark year for the Jumping Church of Kildemock. The 50th anniversary of its restoration was celebrated on Thursday June 24 and the occasion was marked by an open-air mass and the launch of a new booklet, painstakingly compiled by Fr. Michael Murtagh c.c.

The 20-page booklet contains a detailed history of the church (dating back to the 12th century) and the Jumping Wall as well as diagrams, illustrations and a collection of beautiful colour photographs. Like many others, Fr. Michael refuses to accept the storm story.

In his introduction to the commemorative booklet, he pens:

A storm alone could hardly have lifted a chunk of masonry that is many tons in weight and move it one or so metre inwards and replace it at a precarious slant. The wall is built of rough rubble stone and would easily crumble.

There is also the supernatural explanation that hinges on a controversial burial within the walls of the ruined church. It is said that the wall jumped inwards to exclude the unworthy corpse from the holy ground of the church interior.

There are other local stories from the period that tell of controversial burials and refusals of burials to those deceased who offended the church's sense of what was right.

Whatever the explanation – natural, supernatural, or both – the natural beauty of the area and the spiritual history of a community combine in this hallowed spot and draw one into contemplation. 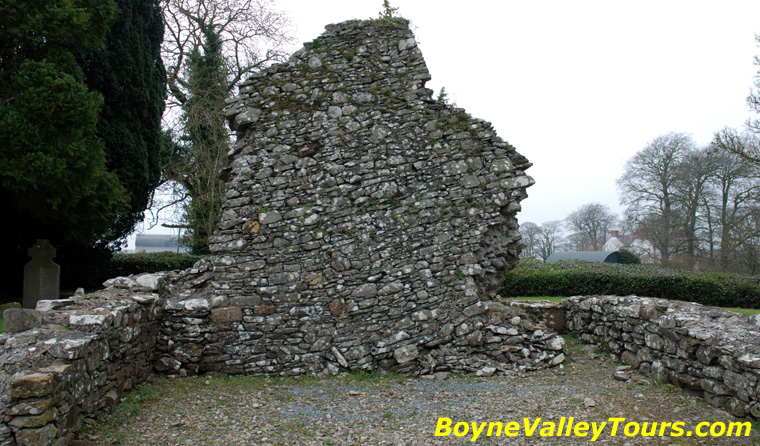 Once upon a time, the medieval walls in Kildemock graveyard enclosed and protected a parish church. This was dedicated to Saint Diomoc, an early disciple of St Patrick. In the early days of Christianity in Ireland, our patron saint is believed to have chosen Diomoc (or Modiomoc) from among his followers. Diomoc is said to have been of the Dal Cais and was a young man at the time.

One of countless ruined churches to be found nationwide, Kildemock in its glory stood whole beneath a roof of small slates, a stone altar at the east end lit by a stained-glass window.

The legend that a wall of the church once jumped from its original resting place has always been circulated in the locality but there was no visible evidence of this extraordinary event until the ruins were restored some 50 years ago. Once the accumulated debris of centuries were removed by archaeologists in 1953-54 and the true outline of the church became apparent, it was revealed that the wall really did stand two-to-three feet inside its foundations. Standing 19 feet high, 15 feet wide and three feet thick, the huge bulk of masonry rises imposingly from the ground, close to the foundation from which it had cleanly been severed.

Which brings us back once more to the cause of the jump. How could a storm achieve so freakish a result? A wall cannot be sliced neatly, transported through the air, and set upright in a new position. Can it?

The supernatural explanation fits the bill much better. The myth goes that a man, who was (appropriately) a mason by trade, abandoned the Catholic faith and turned Protestant. He was working on the building of Stabannon Church when he fell to his death from scaffolding. After attempts to bury the remains elsewhere proved fruitless, the body was brought to Kildemock and laid to rest within the ruined church, inside the west wall. The very next day, the wall was discovered to have jumped inwards, leaving the remains outside the sacred enclosure of the one-time building.

Crazy as this story might sound, it cannot be dismissed out of hand, as there can be little doubting that the controversial burial did take place as well as the storm.